The Turkish authorities prevented a PES delegation in Turkey to visit opposition leader Selahattin Demirtaş in prison, in the North-Western town of Edirne. The delegation led by PES president Sergei Stanishev was held a press-conference in the middle of the road outside the prison. The Turkish police and the gendarmerie tried to prevent any contact between the delegation and the media gathered around the prison, but then allowed the improvised press point to take place. 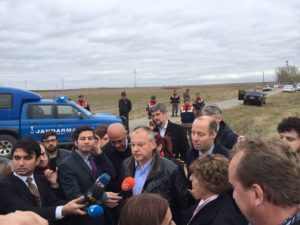